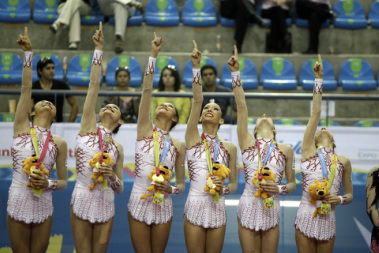 While rhythmic gymnastics does have a lot to do with skill, another huge part of an athletes performance is their mindset while competing.  While competing at a high level of competition, every gymnast is at about the same skill level.  However, it is the girl who is able to put enough focus, drive and dedication into her routine that ends up on top.

Thinking Like a Champion
If you want to be a champion, you need to think like one.  One way athletes are able to reach their goals is visualization and goal setting.  Goal setting helps athletes because it allows them understand where they are and where they want to go.  However, these goals should not be based on performance.  The kind of goals an athlete would want to set for themselves should be subjective goals.  This mean that the goal being set should be based on trying and achieving one’s best effort.  Also, setting these goals will help gymnasts learn to plan out their weekly training in order to accomplish what they desire.
Another good technique for performing your best while competing is the concept of visualization.  If you want to be a champion, a gymnast needs to visualize herself as one.  A huge part of the sport is being able to believe in yourself and eliminate thoughts of self doubt. In order to visualize properly, one will need to be able to reach full concentration.  A good way for a rhythmic gymnast to visualize would be to lay or sit down with their eyes closed.  The body should be completely relaxed and breathing normally.  The gymnasts will then visualize herself performing her routine in her mind.  In your mind, you will picture yourself performing your routine with absolutely no mistakes.  However, if you do visualize yourself making a mistake, you need to start over from the beginning of the routine.  Repeat this process until you have completed all of your routines perfectly in your mind.

Bouncing Back
Although rhythmic gymnasts are constantly striving for perfection, they are still human.  Therefore mistakes will be made.  It is how the gymnast reacts to these mistakes that determine the consequences. For example, if  a gymnast is performing and a mistake is made during the routine, she must act as if it never happened and completely disregard it from her mind. If a gymnast were to continue to think about the mistake that was just made, she will then lose focus on the other skills she has yet to perform in her routine, resulting in even more mistakes being made.  While performing, a gymnast should use her mistakes as motivation to continue on with a better, more focused routine. 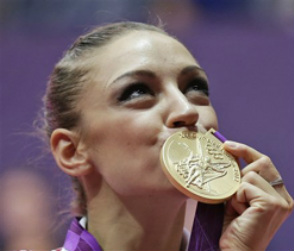 1. Success comes first in the mind, so visualize yourself accomplishing your goals.
2. Remember, you are the only person who can hold you back.
3. Forgive yourself and love yourself despite past failures.
4. Decide what is important in your life and focus on that.
5. Conquer each negative thought the moment it enters your mind, when it is weakest.
6. Give up the idea that things won't go right unless you worry about them.
7. If you bring the body of your dreams to the point of resolve, you'll soon be living in it.